Johnny Fewings reports on our June visit to Barnhill on Jura. Photographs by Quentin Kopp.

It was emotional. I guess I knew it would be.

On Sunday evening Johnnie from Canterbury asked me what my favourite part of the day had been. It wasn’t difficult.

To be in the room and look through the window where Orwell had sat for so many hours writing Nineteen Eighty-Four. To look through the same window at the same view. The same spectacular view. 75 years later, in that room, in that moment, nine of us were George Orwell.

It was a priceless moment and if you have the chance I encourage you to take it.

My wife and I had booked to go on our own a few years previously. Just the two of us. We understood we would have to walk the last 4 miles, we understood we would only get to the garden gate. We were looking forward to it, then along came covid so we didn’t get to go. Then a few years later I received a mail shot from Quentin Kopp from the Orwell Society (I’m a member) asking for anyone who wanted to join a group going to Barnhill in June to say so now as a vacancy had appeared.

Going with the Orwell Society is a whole other experience.

No four mile walk. It’s a boat to just behind the house.

Rob and Sophie Fletcher, a young couple and their two children Charlie and Coco, the Grandson of the Fletcher’s, live there now. The house has been in the Fletcher family for 100 years and It was the same family that rented the house to Orwell. Nowadays the family welcome the Society members with cakes and tea, they open their home for a few hours every few years and embrace the spirit of Orwell and we Orwell pilgrims with open arms.

A few days before the trip Richard had received a letter from his cousin Lucy who had been an occasional companion at Barnhill back in the day. Fletcher family members sat on the lawn, as enthralled as the rest of us, as Richard read the letter detailing what the journey from London entailed in 1947. 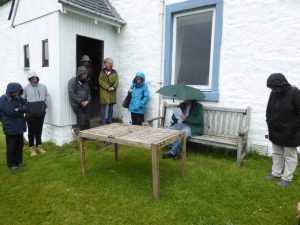 The journey is still a challenge. In fact, the extent of the challenge even with today’s travel technology only highlights to all of us what it must have been like in 1946.

Our boat trip from Tayvallich to Craighouse was ‘bumpy’. We knew it would be bumpy. The black cloud straight in front of us as we left Loch Sween said ‘bumpy’. Quentin told me later that this was the fourth trip to Barnhill and that our boat trip was the worst so far. The return trip was a flat calm, which is more typical.

Don’t be put off. Not once did it feel unsafe.

We all meet at 4.30pm on the mainland at Tayvallich on the Friday. 21 people meeting each other, many for the first time. The main base is the Jura Hotel, alongside the distillery. The first dinner at the hotel and friendships begin. Some Orwell talk of course. All interesting. Those with little knowledge are no less comfortable than those with plenty.

Craighouse from the boat leaving for Barnhill

But it’s Sunday that we’re here for.

All over Scotland, visitors, just like us, are doing exactly the same thing. Seeing the beauty of Scotland and the Scottish Isles from a boat. We too see eagles, puffins, deer, rabbits, snakes, swans with signets, and more but, unlike those other visitors, we have another goal. 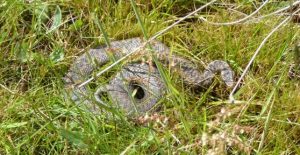 An Adder spotted by Rob Fletcher

And then we see it. Barnhill. Just to the left of us sitting proudly on the hill. 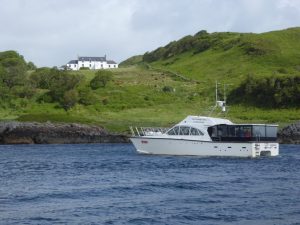 Barnhill from the sea

And now we’ve gone past it and we’re landing the boats on the small jetty behind the house.

It’s a slight uphill walk from the jetty. Maybe half a mile.

The walk is magical. I mentioned to Johnnie that I’m thinking to myself ‘Orwell did this. Exactly this’. ‘That’s what I was thinking too’, he replies.

I have no idea how long we stayed. Somewhere between one hour and two I’d guess. What had seemed like a crazy place for someone so sick to live, didn’t seem so crazy anymore. The contradiction between what he was writing on that clickety typewriter, and what he was seeing out of that small first floor window seemed even more striking.

(Although Richard did recount his memory of the permanent fug in the room. A mixture of the dark black tobacco smoke from the cigarettes and fumes from the paraffin stove). 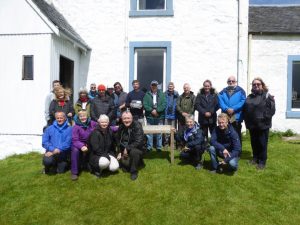 The members with Rob Fletcher in the centre with the Barnhill Slate, a gift from the Society

After Barnhill we visit Corryvreckan, we actually take the boat right to the infamous whirlpool. This is where Orwell and his son so nearly drowned. The third largest whirlpool in the world and where they capsized on the way back from a camping trip, marooned on a rock until passing fishermen picked them up. It’s kind of scary. Richard shows us the rock.

And then we were gone.

The beauty of the island is spectacular, the significance of Barnhill immeasurable, and to share it with 20 other likeminded souls a privilege I will cherish forever.

So yes, it was emotional.

It could have been being able to sit with a glass of (sherry cast) Jura whiskey and plot with new friends the possibility of a similar trip to Orwell’s haunts in Morocco, (or what about Burma!?).

Or the absolutely priceless luxury of sitting and listening to first hand stories and anecdotes from Richard and Quentin.

But actually, it was just looking out of a window that meant so much to Orwell, and consequently has come to mean so much to so many of us. That was the moment it became emotional.